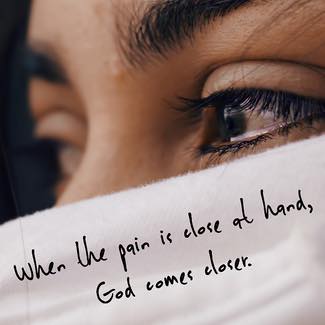 Our reading from the Narrative Lectionary is from 1 Samuel starting with chapter one and going through Chapter 2 verse 10. We are introduced to a woman named Hannah. She was married to a priest named Elkanah. Elkanah had two wives, but he favored Hannah. His other wife had children, but Hannah had none. Hannah cried out to God, begging for a child. She promised God that if God would provide a child, she would give the child in service to God. She was so desperate that the high priest Eli thought she was drunk when he saw her praying. When she told Eli what she was praying for, Eli blessed her and joined her in her appeal to God. After this encounter she became pregnant. After weaning the child, she gave him to the temple to serve God, just as she had promised. The child's name was Samuel, and he would go on to be the prophet that would anoint the first two kings of Israel.

Hannah looked like she was drunk because she was weeping, moaning, and grieving. When we cry out to God from our hearts, God listens carefully. This does not mean God will give us what we ask for, but God will listen, God will be with you in those moments. We are currently doing a study on the book called "Faith in the Shadows" and one of the chapters focuses on the idea that God suffers with us. Part of the gospel (good news) of Jesus is that God loved us enough to live the painful experience of humanity alongside us.

I have often found that those who are suffering, feel the closeness of God in a special way. Sometimes, it is those of us further removed from suffering and evil, that question God's presence, while those experiencing it are filled with faith and hope.

Fred Rogers encountered this as well. One day he was visiting a man on his deathbed. During moments of shared suffering, he had nothing he could say to soften the pain in the room, so he just sat with the family in the quiet of the moment. When it was time to leave, Fred said his goodbyes to everyone. When he came to the sick man, he leaned in close and said something that nobody else could hear. A friend walked him out to his car and asked "What did you say to him?". Fred replied "I asked him to pray for me. I figured anyone going through what he is going through must be awfully close to God."

If you find yourself suffering, know that God is there, listening and suffering alongside you.

Lord, help us to feel your presence and to know you are there when we are suffering. When we are not, give us the strength and courage to be your physical presence for those that need you. Amen.