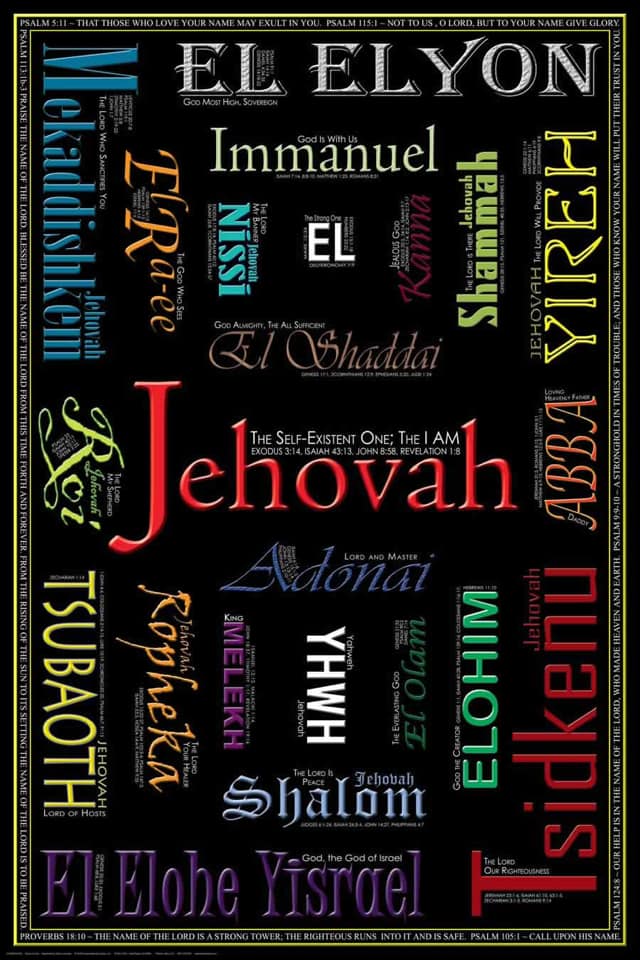 John 17:6
I have made your name known to those whom you gave me from the world. They were yours, and you gave them to me, and they have kept your word.

When I think of my wife, I have many names for her. Mick, wife, honey, baby, Michele, even monkey butt (when she beats me at Hand and Foot or Phase 10) to name a few. All of my names for her are mostly said in a loving manner and is used depending on the situation at the time. Don’t judge me for monkey butt, she beats me ALL. THE. TIME!

I think this also applies to the name(s) of God. If you use/know God’s names than you just may have a happier relationship with God. At least you’ll know who you’re talking to. For example, if you need a particular prayer answered perhaps you should use the name of God that applies. James Montgomery Boice wrote the names of God are windows through which God’s character is seen.

In Old Testament times, a name was more than something to use instead of “Hey, you!” Rather, it revealed important information about the individual. For example, Moses comes from the Hebrew meaning to pull or draw out. The name given to him by Pharaoh’ daughter after she rescued him from the Nile. The name Jacob comes from the Biblical story of Jacob’s birth where he came out holding the heel of his twin brother Esau. A name is so important in biblical settings that Scripture frequently mentions God changing someone’s name to reflect a new reality. Abram, which means “exalted father,” was changed to Abraham, meaning “father of a multitude.”

So, let’s look at some of God’s names:

El Elyon – God Most High (there is no god above this God; used to describe the God Melchizedek served in Genesis 14)

El Shaddai – God Almighty (this is one of the most frequently appearing names for God in the Bible and has also been translated as the destroyer and the many breasted one, as in indicating sufficiency and nourishment)

These are just a few of God’s names; and I would say God has a name for every situation we find ourselves in. God’s names can be great prayer starters and can deepen your knowledge of God.

Which of God’s names most resonate with you today?